Janell Rhiannon
The Homeric Chronicles is much more than a retelling of the Trojan War. Using Homer, Apollodorus, Hesiod, Aeschylus, Greek plays and various other sources, Janell Rhiannon follows 5 major kingdoms as a series of prophecies and marriages herald the coming of a great war.
The “Paris Prophecy” and the “Golden Apple” stories serve as cornerstones in an elaborate timeline,
casting new light on well-loved characters and events.
This series raises the voices of both the heroines and heroes of this epic fantasy.
SONG of SACRIFICE opens up a full generation before the Trojan War. 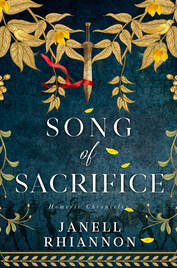 As the Age of Heroes wanes, the gods gamble more fiercely with mortals’ lives than ever before.
Women must rely on their inner strength and cunning if they’re going to survive the wars men wage for gold and glory.
They struggle for control of their own lives. Rise from the ashes of brutal assaults.
Fight to survive… by any means necessary.
In a world where love leads to war and duty leads to destruction,
it is the iron hearts of these heroines that will conquer all.

Begin your journey into this brutally tragic and romantic tale of love, war, and immortal intervention TODAY!
*This series is intended for a mature audience due to war violence and sexual situations.

Clytemnestra claims Mycenae as her own and vows to make Agamemnon pay.
Helen’s gift of beauty tangles with a dark truth in Troy.
Briseis fears she’ll forget her past in Lyrnessus, as she adapts to life as Achilles’ war prize.
Andromache despairs Hektor will cast her aside, when she fails to produce an heir for Troy.
Penelope turns to Anticlea, Odysseus’ mother, for guidance in ruling Ithaka.
Hecuba’s heart breaks, as she mourns yet another Trojan son murdered at Achilles’ hands.

A terrible shadow stretches over the land, and heroines must embrace their true strength becoming…unstoppable.

*This series is intended for a mature audience due to war violence and sexual situations.
Sing, Muse, sing the song of princes…

After years of fighting, the fate of Troy hangs precariously in the balance. Rage and revenge rule the final days, as the heroines and heroes come face to face with their fates. Some will be victorious. Some will die.

“Achilles’ life is forfeit for the pains he has brought to our household. The gods will not protect a defiler. The son of Thetis will not escape the wrath of Apollo’s silver bow. Or my vengeance.” — Hecuba, Queen of Troy
_____________________________
Hecuba bargains with Apollo of revenge against Achilles.
Clytemnestra rules Mycenae as her own without Agamemnon.
Helen struggles against Aphrodite’s curse.
Briseis suffers as Agamemnon’s new slave.
Hektor fights to save Troy against all the odds.
Achilles fumes under the weight of dishonor.
Paris realizes his existence might cost the city he’s come to love...everything.
​

Stacie, NetGalley Reviewer: “I greatly enjoyed this novel! Janell Rhiannon is a new-to-me author, so I wasn't entirely sure what to expect with Song of Sacrifice. But I am so, so glad that I took a chance on something new because I absolutely LOVED this novel! I literally devoured it. The writing was superb, the story was excellent. The characters were unique, perfectly flawed and grew with the plot. The story itself moved quickly, built upon itself and had me hooked from the very first page.”
Chantel, NetGalley and Goodreads Reviewer: “This book is the ultimate amalgamation of everything I love and want in a book. Forgive me readers, if I swoon and fangirl very hard as I write this review. I will try my best to keep it together and thoroughly edit, so I keep my love of this series succinct.”
Maria H, NetGalley Reviewer: “At first I thought the book was a little long, but when I got to the last page I was mad because I wasn’t ready to let it go, and I kept thinking about it for several days afterwards.”
Teodora C, NetGalley Reviewer: “A good book indeed, especially for the mythology lovers! It has a different perspective.”
Pratibha S, NetGalley Reviewer: “For a fan of Greek mythology, this is a wonderful story highlighting some of the characters and their personal motivations and struggles through life. This was a very engaging and beautifully written story. I will soon be checking the next part of the story.”
Zenobia K, NetGalley Reviewer: “A brilliant retelling of the Trojan War. Janell does a great job of bringing to life the characters that we know from the myths and legends surrounding this important event in history. I am a complete history buff and the minute I read the summary of this book I knew I was sold. I love how she brought the female aspect into the story...”
Kirsty B, NetGalley Reviewer: “I adore Greek mythology so I was really excited to read this. It was fantastic! I loved how the author told a well-known story but focused on the journeys of the women as well as the men. It was beautifully written and the details were so rich and vivid. The story is told from many different perspectives but it was never confusing. At times the story was brutal and I thought the author portrayed the Greek way of life brilliantly. Yes, I cried, oh my gosh that one scene (you'll know the scene when you read it) had me in bits!”
Simone, Goodreads Review: “This book made me cry, it made me angry, I felt the breath leave my body when the character’s did. It was,compelling. Ms Rhiannon has a wonderful ability to describe a scene and bring the reader into that place and make them feel, taste, smell, live, in that setting. That’s a rare ability. I’m anxiously awaiting the final novel.”
Jenny, Goodreads Review: “Reading this epic saga of a novel by,Janell, I was totally immersed in a brutally tragic and romantic tale of love and war. This is Greek mythology for adults.”
"...if you love reading Greek myths, pick up this book." ―The Book Curmudgeon
"This author is a great storyteller and I immediately connected with the characters while immersing myself in the gorgeous world she has created rich with Greek folklore and mythology." ―Amazon Review
"A breathtaking story of courage love and sacrifice. I couldn't put it down." ―Amazon Review
"Holy sh#t, that was amazing." ―Goodreads Review
"Janell Rhiannon is a gifted storyteller." ―Goodreads Review
"Why have I not discovered these books before now? Janell Rhiannon has not only captured the true spirit of the Greeks but also has brilliantly recreated the flow and tempo of their words. Her obvious attention to detail makes for an exquisitely written retelling of the precursory events of the Trojan War." ―Goodreads Review (Song of Princes, former title)
Song of Sacrifice